By Micah Sachs and Michael Tomasini

During a quarterly earnings call in 2013, Netflix CEO Reed Hastings was asked why his firm doesn’t report churn. His reply was telling: “I don’t even look at the churn numbers . . . really, what we care about is total growth”.[1] This attitude is pervasive in the over-the-top video industry, as providers downplay the fact that their customers churn at rates far higher than traditional service providers. According to Parks Associates, over-the-top providers other than Netflix or Amazon experience churn of 60% annually, which is three to five times more than a traditional Pay-TV provider (see Figure 1). Customer acquisition and retention are two sides of the same coin, driving service provider profitability from opposite ends of the customer lifecycle – why, then, do Netflix and its peers appear cavalier about something so vital? 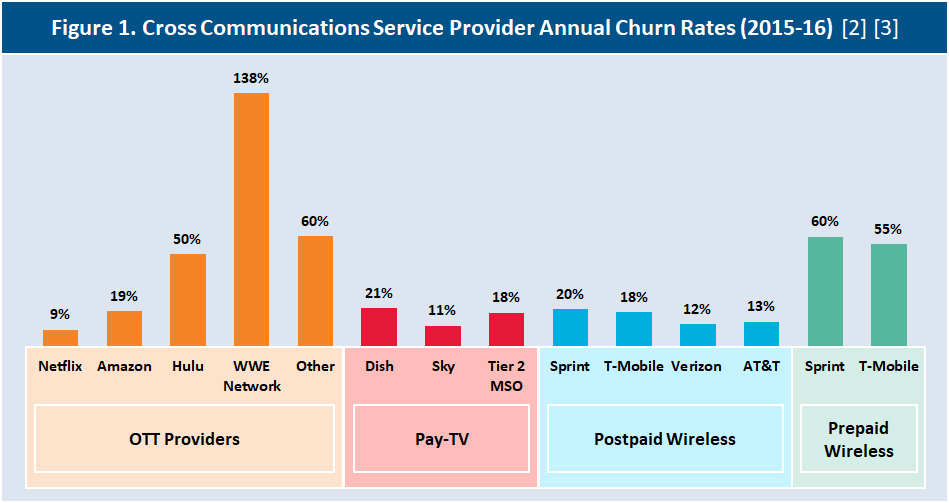 Over-the-top video providers claim that the churn metric is not relevant because they have a different business model than traditional Pay-TV providers. To onboard a new customer, OTT providers need not make a service call, install equipment or activate a device. Customers only have to create a user ID and fill out credit card information. Over-the-top video subscriptions are much less sticky than traditional communications service subscriptions – providers don’t sign customers to long-term contracts or bundles in other services like home internet and phone, and there is nothing stopping an unsatisfied subscriber from canceling her service and subscribing to a competitor. This consumer flexibility creates a liquid market and inevitably leads to subscribers churning at far higher rates than experienced by traditional service providers.

As a result of the different business models, over-the-top video providers have acknowledged what they see as flaws in the churn metric as it applies to their business. Speaking on a panel during INTX 2015, Sling TV CEO Robert Lynch mentioned a phenomenon where customers would cancel their service only to return a short while later, claiming that “we don’t think of it as churn”[4]. It isn’t uncommon for a churning customer to return based on the availability of desired content or a change in their economic situation. In that sense, the churn metric does not paint an entirely accurate picture of the business’ success. Conversely, the quarterly earnings quote from Netflix CEO Reed Hastings continues, “management looks at [net additions] which we do check every week, every day” – in that vein, churn is not flawed, but rather a less appealing descriptor of their business performance than overall subscriber growth. While looking solely at overall growth paints an attractive picture to investors, it hides the danger of constant customer attrition.

How OTT Providers Should View Churn

The over-the-top video market is becoming more crowded – in the last several months, DirecTV and Hulu have announced virtual service provider services, offering a bundle of linear channels streamed over the Internet. ESPN recently announced the development of a direct-to-consumer app focused on niche sports.  There are now more than 100 providers of OTT video services in the US[5], and subscriber growth is slowing (see Figure 2).  As the market matures and competition increases, customer acquisition costs, which are often below $100 today, will likely rise. As it becomes harder to win new customers, it becomes ever more important to hold onto those you already have.

Despite claiming not to be concerned with churn, market leader Netflix has clearly invested in customer retention. Their user interface and recommendation engine are designed to encourage continued usage, especially when subscribers finish watching seasons of popular shows, a prime churn flashpoint. Their content recommendation algorithm auto-queues a recommended show after a subscriber finishes the season of whatever they’re watching. Additionally, a subscriber’s “watch history” (and therefore recommendations) disappear after 10 months of cancellation, providing a disincentive from re-subscribing once per year to watch a particular show.

How Prioritizing Churn Can Help

In the OTT world, content availability is unquestionably the biggest driver of churn. But it is not the only driver, and OTT providers have access to a far greater range and volume of data than traditional Pay-TV providers to understand other reasons for churn. Sales funnel, profile set-up, usage, devices used, geography, preferences, network experience—this wealth of data can allow OTT providers to nearly eliminate preventable churn.

One of the simplest ways to temper churn is to notify subscribers of imminent credit card expiration in order to reduce the incidence of involuntary churn. Conversely, ensuring the transition from free trial to auto-pay status is smooth and unobtrusive avoids premature voluntary churn.

The wealth of data available can make determining the true reasons for churn challenging. While geographic and socioeconomic analysis of the subscriber base may lead a provider to view one demographic group as more prone to churn, analysis of ISP performance data may highlight that this demographic group disproportionately uses an ISP with inconsistent speeds.

A key step, then, in understanding and proactively responding to churn is segmenting the user base. We see two key categories of subscribers that over-the-top video providers must differentiate: “loyal” churners and “vulnerable” churners (Figure 3). 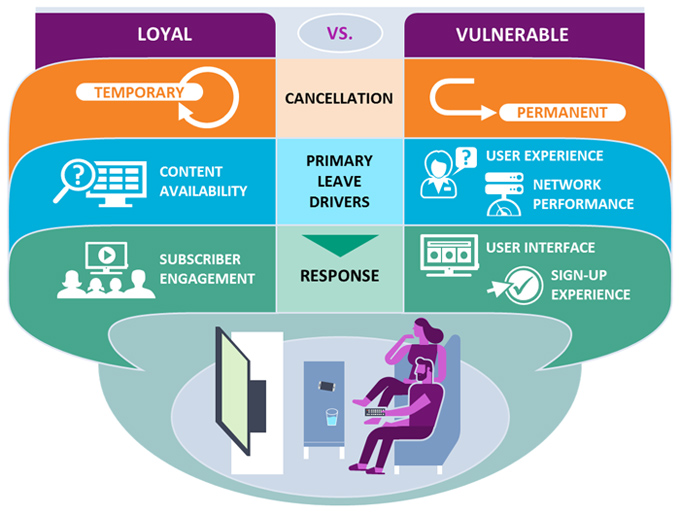 Loyal churners are defined by their tendency to return to the service of their own volition in time; as SlingTV CEO Robert Lynch stated, many subscribers cycle through signing up and canceling multiple times. For loyal churners, the name of the game is specific content availability, whether it be a marquee sporting event or a recently finished season of a show. As Netflix’s tactics demonstrate, keeping these proactive users constantly engaged with content is necessary to maximize the number of months per year these subscribers use the service.

Vulnerable churners comprise the larger group of subscribers who are less likely to re-subscribe following cancellation. Their first experiences–signup, initial profile and preferences setup, and first navigation of the user interface–need to be clean, simple, and intuitive. Following the three-click rule from landing page to watching content is a good barometer for a UI’s ease of use. Monitoring network performance from elements in the OTT provider’s control (internal network, transport network, third-party CDN, peering partners) and proactively addressing network performance will minimize consumer frustration.

Loyal churners can be identified retroactively if a provider has a long enough usage history. But accurately predicting which new subscribers will be loyal churners vs. vulnerable churners (or for that matter, free riders or dabblers) requires teasing out the right signals from the marketing funnel, profile set-up, and demographic data.

The OTT market is still growing. Market leaders with large capital reserves and high visibility, backed by investors with an extended timeline for profitability, are still going to prioritize growth. However, for market leaders, virtual service providers, and niche players serving targeted consumer segments, the story is one and the same: customer retention is vital to continued success and is only going to grow more important as the market reaches maturity. Keeping loyal churners engaged and preventing vulnerable churners from eschewing the service altogether will allow a firm to see a significant increase in profitability; further, incorporating sophisticated data analytics into their churn strategies allows firms with compelling content to reach and maintain their market potential.<>

Getting to Grips with One Touch Switching

The Impact of COVID-19 on VPN Usage and Streaming Habits